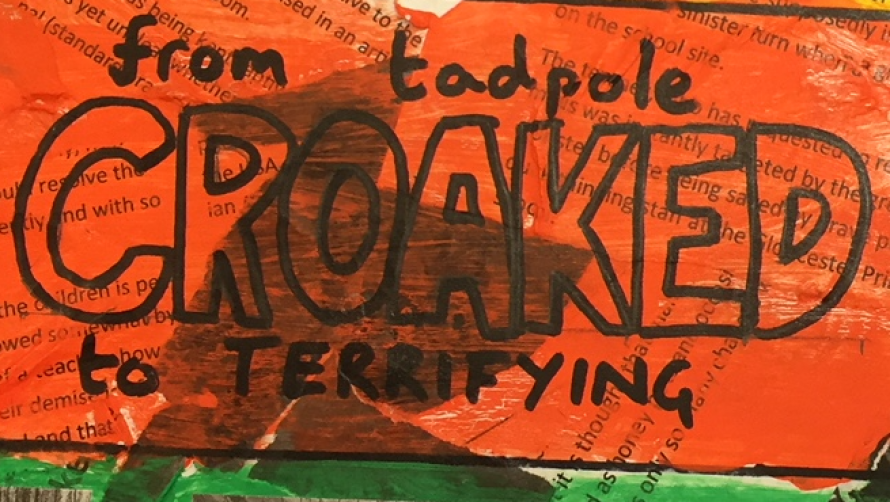 Croaked: from tadpole to terrifying by Coopers Edge Primary School

It was a normal day at Coopers Edge school and as the children walked slowly into the classroom they saw the grumpy old teacher, Mr Herbert. “You’re all late!” he shouted angrily. “Sit down! I’m trying to do the register,” he said. Everyone fumed and rushed to their uncomfortable chairs and immediately started doing their SODA work. Except for Maddie, “We were only late because the classroom door was not open.”

“How dare you answer back?” yelled Mr Herbert.

“Move your name down,” said Mr Herbert, so she did.

When Maddie had moved her name down the class did their morning work. It was times tables…again. Mr Herbert tried to turn on SIMS but it didn’t work. Harrison spotted that a cable was broken, everyone wondered who had done it. Mr Herbert asked Oliver to get the fire register instead, but it had slimy goo all over it . “Eww,” said Tracy.

“What? What?” said Harrison.

Oli went to the cubicles to wash his hands. He noticed all of the bags had vanished from the pegs. Where had they gone? He tried to open the door, but notice d all of them were locked. Who had locked them? Harvey asked for a drink, but all of the cups were gone and the sink was covered in strange goo. What was it? He tried to open the door to get a cup from outside, and he saw something green. He thought it might be grass, but it was bigger than grass. He saw the thing was covered in black spots. “Grass doesn’t have black spots,” he said to himself. Mr Herbert came and closed the blind. He told Harvey to sit down and get on with his work and he told him not to make any noise.

All Mr Herbert did was moan, moan, moan. Zoey, Harvey, Harrison and Melissa were all doing their work and suddenly Mr Herbert screamed, “Be quiet!” even though they weren’t making any noise. “What a horrible beast he is!” thought Zoey, he must be cross about all this slime. Finally, Mr Herbert was quiet.

Mr Herbert marked Allayiah’s work and then went over to the tadpole tank. He was looking in the tank and he could see the caterpillar and the boatman but he couldn’t see the little frog.

Lamin and Jay were working and Mr Herbert was lazy. Lamin and Jay needed help. Mr Herbert said, “Be quiet, you dumb rats! I am not giving you some help. Now do your work!”

As the children were working, Mr Herbert went back over to the tadpole tank. He could not see the little frog. Where was it? Could it be the frog had escaped? “Where have you put the frog, Jay?” Jay looked cross, “I haven’t put it anywhere,” he said.

Suddenly they heard they heard a “RIBBIT! RIBBIT!” The students rushed and pushed to the classroom window, “AAAAAAAAGGGGGHHHHHHHHHH!” The girls screamed in horror. Mr Herbert did not see the frog until Lily shouted, “The frog’s there!” Lots of people were very nervous. Mr Herbert said, “There’s no need to be nervous,” because he thought the frog was small. “I’m scared, Mr Herbert,” said Katelyn. Katelyn was too scared silly and she was speechless. Jasmine was so kind and looked after Katelyn.

The frog’s eyes were big yellow ones and they looked like gold coins. The pupils were black like caves. The frog was so fat, it was as fat as an orange and it smelled like a million dead fish in a pile of cow poo. Its mouth was full of big and sharp teeth that looked like mountains and when it opened its mouth the children could see a big, black chasm waiting to suck them all in like a wormhole. It moved so slowly because it was so big and heavy. It moved like a snail and left slime on the playground. The dark figure dragged itself on to the canopy outside the classroom and sat staring with its big, yellow eyes. The children shivered.

Just then, Mrs Folker ran quickly in to the room. “Do something!” she shouted. Mr Herbert tried to push Zoey out of the classroom, but Harrison and Harvey pulled her back.

“What are you doing?” they yelled.

Mr Herbert tried to push Harvey out of the door, but the children pushed the grumpy teacher outside first and Zoey locked the door. Mr Herbert started to panic, he tried to open all of the doors. First, the Kingfishers’, then the Jays’ and then the Swans’, but all of them were locked. He looked and his knees began to shake.

The frog’s face was slimy and creepy and Mr Herbert started to cry.

The frog opened its mouth and all the children could see was a huge, black chasm. What was going to happen next?

The big, pink tongue shot quickly out of the frog’s mouth and Mr Herbert was gone. The children didn’t know whether to be happy or scared. Would they be next?

After the frog had eaten Mr Herbert, it looked a bit tired. This gave Allayiah an idea. What if she gave the frog lots of wine to put it to sleep? She had read about when Odysseus did that to the cyclops. Sadly, there wasn’t any wine in school but Sam had a better idea.

Samuel ran bravely and quickly to the Zen Garden. When Samuel arrived at the Zen Garden, he picked all the lavender he could find. Samuel thought of making an enormous tank of lavender flies. He painted them with quick-drying black paint and threw them at the frog. So the frog ate the lavender flies and started to get tired. The frog fell asleep.

When the frog was asleep, Josh and Cam got some rope and Larissa ran quickly to Mr Mock’s office to grab some duct tape. She ran like the wind to the frog and she tied the frog up and everyone was safe, for now!

Now they needed to shrink the frog. Nico had a plan. He asked Ian for an old bike pump. He asked Mr Mock to turn the pump inside out so it didn’t blow, but now it sucked. How could they get it in to the frog’s mouth?

Tracy saw something that caught her eye. What was it? It was a long, brown stick. Melissa felt something inside her body, it was a great idea. Melissa took a close up look at the frog. She took a deep breath and bravely used the stick to carefully open the frog’s mouth. Then Jasmine quickly put the bike sucker into the frog’s mouth and pushed the lever. Slowly the frog turned back in to a cute, little frog again.

It was a normal day at Coopers Edge School. Mikey and the class were happy that they didn’t have Mr Herbert as a teacher but now they had Mr Flower. They were doing work so quickly with Mr Flower. “Well done, Swifts,” he said happily and the children were doing their work. Mr Flower went to look at the frog tank. There wasn’t a frog in the tank anymore because Lacey had picked up the shrunken frog and put it into the blue pond at Forest School. “What pet should we get for next year?” Mr Flower asked the class. Oli looked at the children in the classroom and they all shouted, “NOT ANOTHER PET!”