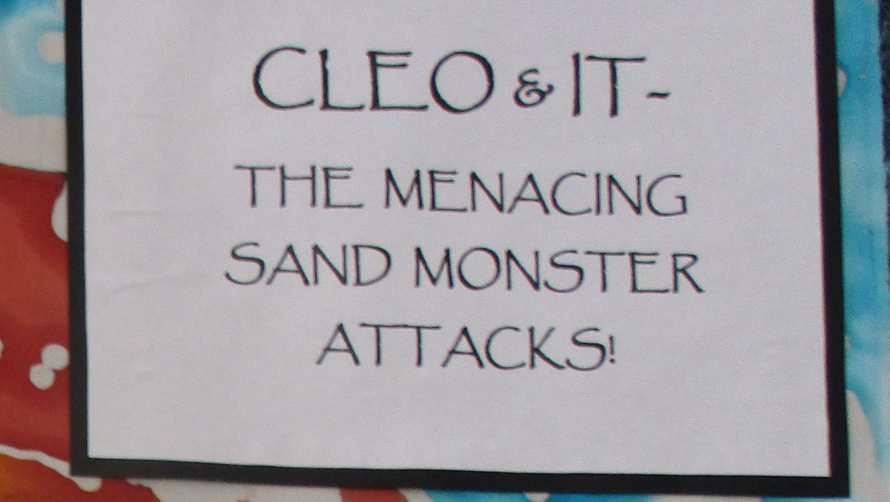 All night long, wind growled while lightning zipped down the long curvy Nile and sand thrashed over the pyramids, as hard as a shooting rocket. Cleo was trapped! She couldn’t escape the crashing, bashing sand storm. She tiptoed in the faint light from the night sky, staring. It had been a terrible day and now with the night, the wind had become stronger and fiercer in its attack. Cleo’s body shivered. Would she escape from the whooshing, swirling sand storm?

Suddenly, a peculiar shadow appeared out of nowhere, its growl echoed as it got closer and closer and closer. Cleo’s body trembled with fear; her cold, sweaty hands were shaking uncontrollably. Although she was frightened, Cleo was determined to see what the mysterious shadow was. The flicker of a red eye shone like the sun.

“Is it my mind playing tricks on me?” She wondered.

What was this creature that would live in such a barren place?

Soundlessly, Cleo dashed behind the mighty sphinx and lay down in the hot sand as still as a statue. She didn’t dare move as she knew that the pitch black, slender shadow could come up to her at any second. A shiver ran down her spine. Cleo cautiously poked her head around the Sphinx and saw a demon-like creature strut through the gritty sand, crunch after crunch. In a heart stopping moment, Cleo could see a menacing arm, dripping with sand, come around the corner. Cleo, crouching next to a cold jagged rock, as still as the stone itself, she held her breath until she thought she might explode!

Sneakily, scuttling towards her, the demon pushed the sand around with its sharp claws. Cleo could see freaky, red, glowing, squinted eyes blinking and could hear sand falling to the ground. She started to panic! The demon’s wheezy breathe was now a panting noise.

“Oh, no! Has it seen me?” She muttered to herself.

Petrified, Cleo could bare it no longer. Risking it, she sprinted out from behind the Sphinx, with her heart pounding; she leapt in the reeds by the River Nile. Crouching out of sight, frozen as still as the Sphinx, the sand demon had not followed her. Cleo could hear footsteps dying away as the frightening sand demon retreated into the distance.